What a difference a year and a half makes!

By the end of 2009 -- when we last asked for your money -- we had set up our "ham radio base camp" in Gerlach, Nevada: a UHF repeater, UHF and VHF IRLP nodes, and an APRS digipeater. The installation in Gerlach provided Amateur Radio voice communications and GPS position reporting both for convenience and public safety. Whether you're were just trying to find your friends camping on playa or were desperately seeking help for someone lost or injured in the desert, the Black Rock Amateur Radio Association's radio resources are there for you -- 24 hours a day, 52 weeks a year.

It formed a solid foundation for Amateur Radio in the Black Rock desert.

In the 18 months that followed, we've built like crazy on that foundation. 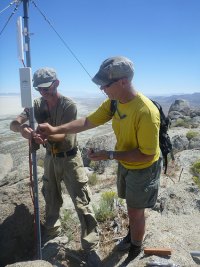 Phil, N6TCT, and Michael, KI6TYV, working on the new repeater in the mountains high above the Black Rock desert.

We're looking to raise $5,000 by the end of the year to support our current and ongoing efforts to improve and expand the footprint of Amateur Radio in the Black Rock desert.

Accomplishments of the last 18 months include:

But it's also cost a heck of a lot of money.

Fortunately for you, it's too late to lug solar panels and batteries up a steep mountain in triple-digit temperatures. But it's not too late for you to lend a hand in another significant way: by helping pay for it. We welcome your financial support at whatever level you can afford; membership begins at the Supporter level for just $20 and, for those who are licensed Amateur Radio operators, includes access to a special feature of our repeater. An additional special feature will be shared with those joining at the $50 Patron level. (Interested in really earning our undying love? Allow us to suggest the $100 Benefactor membership level!)

Please take a moment to scroll up and look at the donation levels to the right, choose an amount, and then make a donation to the Black Rock Amateur Radio Association. We're counting on your support.

P.S., We're still waiting to hear back from the IRS regarding our application to establish our status as a 501(c)(3) tax-deductible organization. We will let you know as soon as we hear something.